When working with finite fields, if the number of elements is a prime power

with m > 1, you can represent the elements as polynomials with degree m-1 and do the field addition and multiplication modulo a irreducible polynomial with degree m.

The rows, top down, represent 0 to 4. The columns, right to left, represent 0 to 4. Each square is the result of the addition of the respective numbers in the row / column it belongs to. Black is 0, purple is 1, red is 2, orange is 3, yellow is 4.

I always wondered what would happen when you changed the modulus. Obviously the group “changes”, but in order to actually see it, I’ve built the multiplication table for GF(5²) modulus 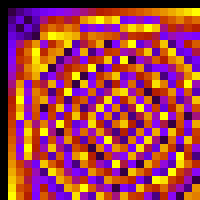 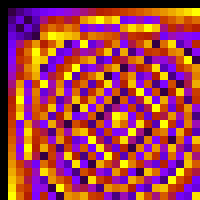 Of course, both are isomorphic, so you’re free to pick your favorite modulus. 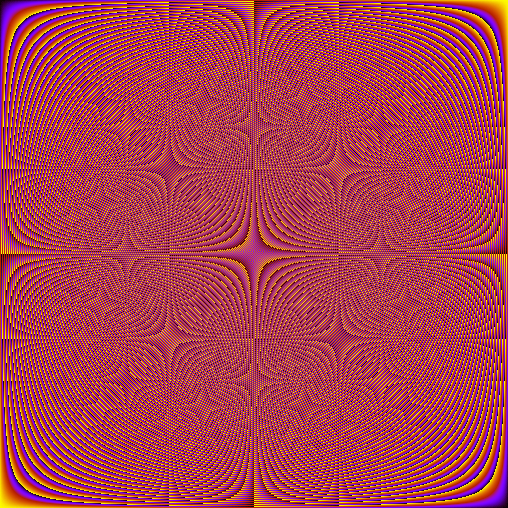 What about the group of points on a elliptic curve over a finite field, which is also a group used in cryptographic schemes? This is the additive table for the points on 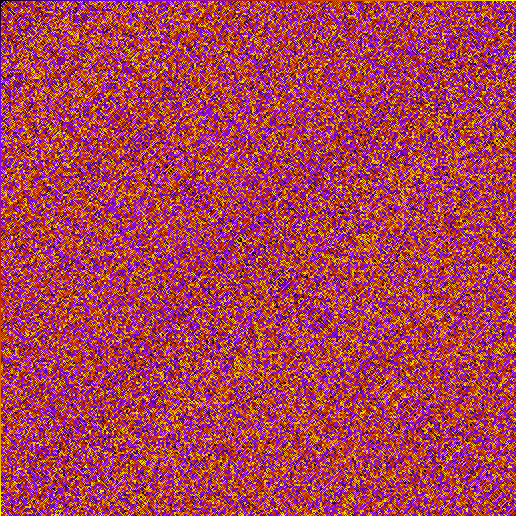 The difference between them is striking; the elliptic group seems almost random. This is (intuitively speaking! I’m not being formal here) the reason why this group is used in cryptography in the first place: since the group structure is more “messed up”, you can get away with using groups of much smaller size (no smaller than

elements). This is not set in stone though; maybe someday someone will come up with a better method to crack this seemingly random structure (for now the best method to solve the discrete log problem for elliptic groups is exponential, while the best method for integers modulo n is sub-exponential).

It’s worth mentioning that even this elliptic group is not that extraordinary: it is isomorphic to the very simple additive group of integers modulo 506: 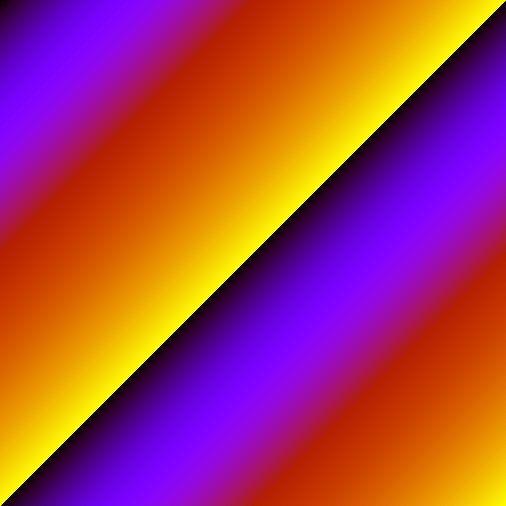 The big problem is to find the isomorphism! You can see this better with a small example. This is the elliptic group of

over GF(5) (left) which is isomorphic to the additive group modulo 5 (right):

To generate those images, I’ve used Python with PIL and Sage. Sage aims to be a open source replacement for (expensive) software like Magma, Maple, Mathematica and Matlab. Since I’ve never used those, I can’t really say how it is going in its mission, but it’s really awesome. If you’re a Windows user you’ll probably be scared by the fact that the Windows version of Sage is actually an entire Linux virtual machine! They’re working to port it natively, but even until then, it’s worth it (and you’ll have an excuse to try Linux 😉 )

Someone asked for the source code used to generate those. It’s ugly (I’ve added comments at least) but you can download it here: the sage script and the python script. In the sage script, uncomment the lines representing what you want to plot, then run ./sage gentable.sage (or whichever path to were sage is). It will generate a data.txt in the same folder. Now run python plottable.py img.png to plot it on the img.png file (or omit it to show on the screen). You’ll need to have PIL installed.

If you don’t want to plot fancy stuff as elliptic groups, you can easily transform the gentable.sage into a normal Python script and write the addition/multiplication yourself (like a + b % n). Have fun, and feel free to ask anything.